A Greater and Happier Mapo through Communication and Innovation.

About Mapo-gu
Symbols of Mapo-gu
프린트

> About Mapo-gu > Symbols of Mapo-gu

It visually represents diversity in Mapo-gu and harmony between the city and humans by connecting symbols representing various characters of the area with a single line.

The design of the crest shall not be used for commercial or personal purposes, and only those who have applied for and received approval for the use of the crest in accordance Article 16 of the Seoul Mapo-gu Ordinance on Symbols can use the design. Those who use the crest and/or brand slogan of Mapo-gu without permission may be subject to applicable measures pursuant to relevant laws and regulations, including the Trademark Law.

It represents the meaning that anyone can have dreams and visions for their future in Mapo-gu where diversity exists in various fields such as culture, art, industry, and media.

A basic combination of the crest and slogan can be arranged horizontally or vertically according to the conditions of media.

The seventh popularly elected government of Mapo-gu is based on the administrative philosophy that the participation and cooperation of community members is essential for the development of the district, rather than the capacity of individuals including the Mayor of Mapo-gu. In today's administrative environment that is becoming more complex and diverse, the seventh popularly elected government of Mapo-gu seeks to pursue and implement bold innovations in all areas of district administration together with the residents. To represent its will to make a community in which each and every resident is happy with these efforts, the slogan of Mapo-gu was decided to be, “A Greater and Happier Mapo through Communication and Innovation.”

Symbolic meanings of the design

"ㅓ" in the word "더" (meaning "more") was visualized into a person confidently standing up and the two strokes in the characters "포" of "마포" (Mapo) were expressed as the faces of two people looking at each other, thereby representing a district administration based on communication with the residents. Additionally, the lower tip of "ㅏ" in the letter "마" was extended and then strongly connected to the next stroke to stress that Mapo-gu is a place where the north and the south meet and that it will take the lead in the reconciliation of the two Koreas. The soft but bold font was partially colored in blue to represent trust, dignity, transparency, and the image of a young city full of vitality. The images combined with calligraphic letters represent three people linking arms, symbolizing the people of various groups communicating with each other and living happily together in Mapo-gu. Just like the calligraphy, the overall design was focused on representing human images that contribute to connectivity 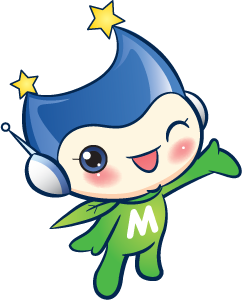 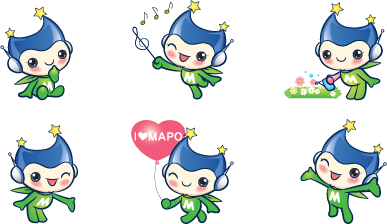 Mapo-dongi was born on July 1, 2004, in Mapo-gu, a place where an abundant and happy life is promised to all.
The two stars on the head symbolize a new millennium and represent the hope that the all the dreams of Mapo-gu residents will come true. The curved head is reminiscent of a map of Mapo while symbolically connecting the tradition passed down since the era of Mapo Naru to today. The body symbolizes the recovered nature of Nanjido Island.
Mapo-dongi, who is always cheerful and energetic, is eager to share love, happiness, and dreams with the residents of Mapo-gu.