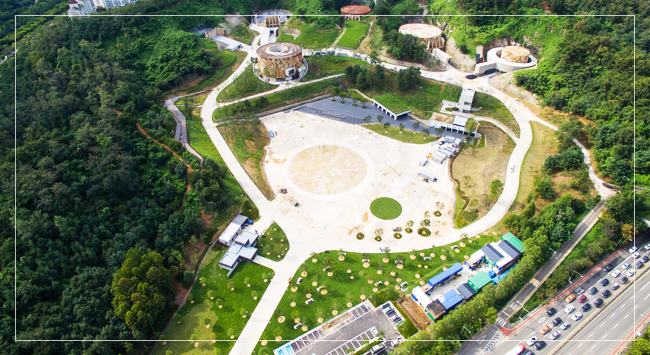 In 2017, the Mapo Oil Depot that was veiled for a long time returned to citizens as a cultural park. Before, the Mapo Oil Depot was a Grade 1 Security Facility closed to the public for over 41 years.In 1973, Korea had difficulty supplying crude oil during the first oil crisis. To prepare for emergencies, the Korean government built the Mapo Oil Depot near Maebongsan Mountain in 1978. A total of five tanks as high as a five-story apartment building were filled with 69.07 million liters of oil, an amount that could be consumed by all Seoul citizens for a month.

In 2013, Seoul City held idea contests for the utilization of the site of the oil depot that became an abandoned industrial facility. Based on the winning design titled "Reading the Story of the Site" at an international design competition, a design advisory committee and citizens' site tour group were organized, and their opinions were actively reflected in the design.
At the end of 2015, the construction was commenced with the aim of preserving the original characteristics of the facility while recycling the resources. The oil depot was reborn into an ecological and cultural park and a complex cultural space through the project where many citizens participated.

The tanks used to store oil turned into cultural tanks that create new cultural experiences every day. The existing five tanks were transformed into open cultural spaces and the sixth tank that was newly built using the iron panels of the old ones became a community space for citizens. The outdoor space that remained empty was regenerated into "Culture Yard" where children can run and play.
The forests in the site were preserved to a maximum degree and formed into a park by planting more flowers and trees. Following the trail leading to Maebongsan Mountain, travelers can see wild rabbits and squirrels in their natural habitats.

The space that represented the industrialization era symbolized by oil and construction was revived into an ecological and cultural park focusing on the values of eco-friendliness, regeneration and culture. Including markets, exhibitions, performances, workshops and other various cultural events are continuously held in this place. The citizens of Seoul share the eco-friendly and creative ways of life as autonomous, cooperative and active citizens. The Oil Tank Culture Park will continue to fill its space various cultural resources together with the citizens as a space where culture is created and a hub of a transition city.